The Hall County Sheriff's Office Special Weapons and Tactics (SWAT) team was originally formed in 1976, with 8 officers. Since that time, the team has expanded to 25 members, assigned to various duties such as entry team, breaching, less-lethal munitions, designated marksman, and tactical emergency medicine. 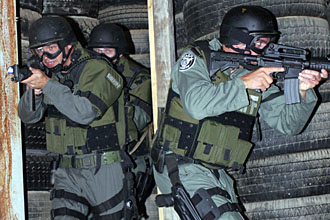 Team members are among the best marksmen and most highly trained officers in the Sheriff's Office, coming from primary assignments in all divisions and undergoing a rigorous physical and mental evaluation prior to selection. Once selected to join the team, Officers are required to successfully complete a demanding basic SWAT school and continue on to more advanced training in team tactics, specialized weapon systems and munitions, marksmanship, explosive and mechanical breaching, and emergency trauma. Annually, SWAT team members undergo a minimum of 80 training hours and are on-call around the clock, every day of the year.