Varied History
Hall County's unique history - dramatically different from the South's traditional plantation culture yet distinctly Southern in its own way - is as rich and varied as a colorful tapestry.

Founding
Hall was founded in 1818, when the region's mountains were still populated by Native Americans, as the trading center of Northeast Georgia. Gainesville, its seat, soon became a frontier boom town as settlers flocked to homesteads in the rolling hills formerly inhabited by Cherokee Indians. With the discovery of gold in Lumpkin and White counties to the north in 1829, Gainesville became the trading and supply center for North America's first gold rush. While miners left for California in the mid-1800s, North Georgia continued to develop as a farming region with Gainesville as its hub.

The Railroads
In 1871, the opening of Atlanta and Charlotte Air Line Railroad brought further growth. The area developed as a mountain summer resort, with local springs touted for their health-giving qualities and resistance to fever that plagued the South's coastal areas. Gainesville, the "Great Health Resort of the South," soon housed the region's first hospital, college and military academy along with a sizeable cultural base - all traditions that remain today. Along with hotels, large Victorian and Georgian style homes graced its streets. The city was the first south of Philadelphia to install electric streetlights, and provided residents the services of an electric streetcar system. 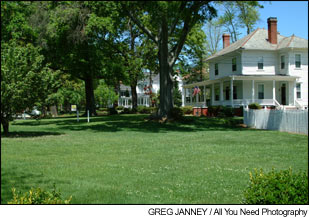 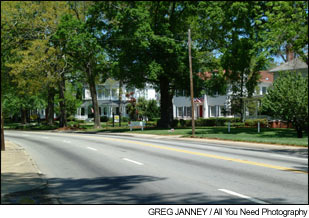 With the Great Depression in the 1930s, Hall County's economy suffered. Cotton production was hampered by infestation of the boll weevil, lumber shipping declined due to the Chestnut blight, and the nation's second-deadliest tornado struck Gainesville in 1936. More than 200 were killed and 1,000 injured in the violent storm, which obliterated many historic homes and buildings in Gainesville.

Buford Dam, built in South Hall by the U.S. Army Corps of Engineers in the 1950s, created 38,000-acre Lake Lanier with its 540 miles of shoreline. Millions of visitors each year now enjoy recreational water sports provided by the lake, easily accessed from Atlanta via several major highways. Additional diversification in the county's economic base has come with new industries attracted by Lake Lanier, Hall County and its quality of life.

While Hall's population has grown 40% since 1990, it continues to build on its historic base as the primary center of Northeast Georgia: its banking and financial center; the regional seat of the Federal Court; the health center, with more than 300 physicians and the region's largest major hospital; the educational center, with Brenau University, the University of North Georgia, Lanier Technical College, Riverside Military Academy, 2 public school systems and several prominent private schools; the sports center, with headquarters of the Atlanta Falcons, Road Atlanta, Olympic rowing and canoe / kayak facilities, several championship golf courses and dozens of public parks and camping areas; the arts center, with a wealth of cultural organizations, societies, groups and clubs. Uniquely Southern, rich in history but constantly evolving and progressing, Hall County offers both newcomers and long-time residents a superb environment unmatched anywhere in the world.
View All
/QuickLinks.aspx
Tag Office
Online Payments
Report a Concern
Maps
Comment Card
Jobs
County Videos
Government Websites by CivicPlus®
[]